60 years of US population pyramids

I recently went down a rabbit hole of Census Bureau (CB) data initially spurred by an interest in how the demographics of swing states are changing. I also just read Matt Yglesias' One Billion Americans: The Case for Thinking Bigger, a call for a range of policies to push US population growth in a new direction. I ended up with the chart below, a picture of the past, present, and future demographics of the country combining five variables: (1) Population (2) Age (3) Race (4) Gender (5) Calendar year. A few significant long-term trends that have far-reaching impacts appear.

I should note that the CB considers Hispanic an ethnicity or lineage rather than a race. Someone of any race can identify as Hispanic according to the CB's methodology. I decided to break whites into Hispanic and non-Hispanic groups while keeping all other races as a combination of the two to highlight the change in the proportion of whites identifying as Hispanic.

The graying of America comes through in the wave of Boomers that are now entering their retirement years, and the population aftershock of the baby boom shows up in the relatively large amount of 25 - 39 year olds in 2020. Morgan Housel notes in a piece last year that in 1960 there were three times as many Americans age 0 - 4 as age 70 - 74, and by 2060 those groups will be about even. Among other drivers, he emphasized improved healthcare in developed countries lowering child mortality and thus birthrates. He also cites a paradox created by education costs, where the number of kids someone thinks they can afford declines the wealthier they are because of an offsetting increase in expectations for the levels of education attained by their offspring.1

Of course, this shift has and will continue to affect the labor market, economic growth, demand for types of services such as eldercare, and the dynamics of social programs. Whether an aging population may also be a key source of disinflation serves as a topic of much debate.

The chart also illustrates the increasing racial diversity of the country. In 2000, over two-thirds of the US population was non-Hispanic white. The CB numbers show that less than half of the population will be non-Hispanic white by 2045. So much of recent shifting in the electoral map and the future political landscape hinges on this evolution.

Yglesias' new book is an argument that the CB forecasts in this chart should look a lot different than they do, meaning that the federal government should make a strong effort to boost the size of the American population beyond its current trajectory, even to a magnitude comparable to China's and India's current populations. The CB estimates the total US population at just over 400 million in 2060, a long way from the billion Americans Yglesias throws out as a provocatively lofty and unattainable target. He proposes that policymakers should prioritize tripling the American population in order to keep the US "number one" amongst geopolitical players.

His highlighting the relatively small size of the US population compared to the rest of the world reminds me of an image in Hans Roslings' book Factfulness, in which each figure represents a billion people inhabiting one of four geographies. 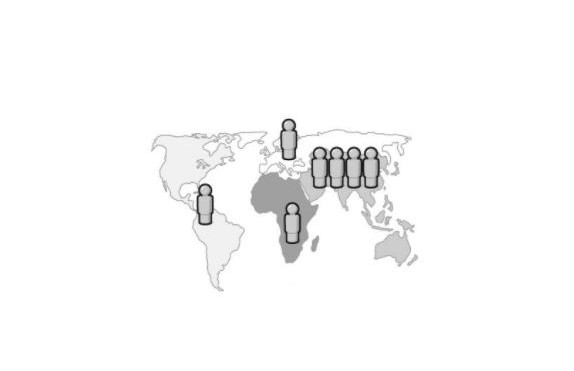 Rosling specifies in the book that:

The PIN code of the world is 1-1-1-4. That's how to remember the map. From left to right, the number of billions, as a PIN code. Americas: 1, Europe: 1, Africa: 1, Asia: 4. (I have rounded the numbers.) Like all PIN codes, this one will change. By the end of this century, the UN expects there to have been almost no change in the Americas and Europe but 3 billion more people in Africa and 1 billion more in Asia. By 2100, the new PIN code of the world will be 1-1-4-5. More than 80 percent of the world's population will live in Africa and Asia.

Yglesias does little to reflect on whether what the US has wrought so far with its power on the global stage warrants maintaining its standing, intimating only that "some left-wing intellectuals might suggest that the end of American hegemony would be desirable." He has "never heard an elected official from either party articulate that view," ostensibly the criteria for greenlighting the continuation of a US role in international affairs that over the last two decades has appeared mainly concerned with unleashing hell spawn on Middle Eastern cities.

I get it though. With the alternatives being a China that's outcompeting the techno-dystopias of Black Mirror in its use of surveillance and workcamps, an India refining its taste for nationalism and islamophobia, a Russia that hasn't tired of poisoning opposition leaders and throwing journalists out of windows, a Brazil busy torching the Amazon, and a core of Europe still dabbling in the sadism of foisting austerity on the periphery, the US can actually seem appealing. Yet when the only registered participants are bridge-dwelling trolls, a win at this year's beauty pageant shouldn't be considered very impressive. Regardless, it seems clear Yglesias' focus is his grab bag of policy prescriptions themselves instead of the theme chosen to link them with a sense of purpose in a single volume.

One Billion Americans is, as a result, more compelling in its means for reaching its population goal than its reasoning for pursuing it. It lays out a policy framework that would enable Americans to more easily provide for a family and for immigrants to legally find their way here and contribute to the economy. Implementing the proposals still wouldn't get the US to a billion Americans in our lifetimes, but that doesn't mean they wouldn't be good for Americans. Yglesias advocates for building more housing and reforming zoning to address the urban housing crisis as well as offering paid parental leave, preschool, aftercare services, and establishing federal public universities to help make higher education affordable. He supports Heartland Visas which would funnel immigration flows to communities in the US suffering from depopulation.

The book does a good job describing the debate over whether there's a detrimental impact from immigration on native-born people's wages. Yglesias explains that the evidence of such effects is extremely narrow and that immigration should not be considered zero-sum. This last point shouldn't be controversial. A good way to make everyone wealthier is to grow the economy. There are two main ways for a country's economy to grow over the longer-term: (1) increase the size of its labor force and (2) increase the productivity of its labor force.

People who have grown up in the US haven't been having a ton of babies, and US productivity growth has shat the bed over the last decade. That leaves foreign-born workers joining the US labor force as a relatively fast, effective lever to pull in order to support long-term economic growth. Limiting immigration when labor force and productivity growth continue to slump is an approach that's not as much shooting oneself in the foot as it is placing ones' arms into a wood-chipper whilst simultaneously tonguing a cyanide pill like it's a Jolly Rancher, economically speaking.